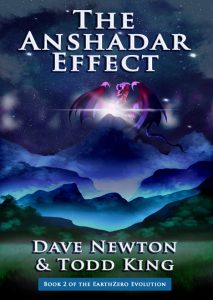 Dave Newton and Todd King present:
THE EARTHZERO EVOLUTION – BOOK TWO: THE ANSHADAR EFFECT
One year and one day after the cosmos shattering events of The Lightbringer’s Sigil, EarthZero’s new immortal heroes vie for control of the world with the Council of Glass, whose religious zealotry has enmeshed the fallen Soulthief, Petrus Romanus, in a gambit to awaken his latent cosmic power. But Mhyrranda, the Duchess of Dreamland, and her team of iconoclastic immortals, led by the newly risen VoidSpawn, implement a world-ranging plan to bend and bind the Dragon itself to the collective good of the world. All the while, the Dark Earth Mother, Chthon, the metacosmic dual-aspect of the Dragon, manipulates the Cosmic Shaper Helel, forcing the originator of the EarthZero simulation to play its own unique role in the Dragon’s Game. The Death Horde, known as the Vanth’Vash’Var, continue to approach EarthZero for a final reckoning, even as their spies arrive upon the scene to sow havoc and discord. Meanwhile, the consequences of the Dragon’s Game loom, actualized and manifested in the form of Denny’s and Rachel’s infant daughter, Penny, who has been born immortal: Anshadar.
305 pages.